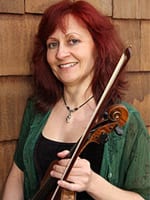 Rosie Carver is a member of the BC Registered Music Teachers Association (BCRMTA). She joined the association in 1997 after receiving her Associate for the Royal Conservatory of Toronto (ARCT) diploma.

Rosie uses a positive approach to teaching and believes that with proper training and awareness, a student can venture into classical, fiddle, or whichever style they choose. Many of her students have achieved high marks for their examinations including silver medals in BC.

Rosie studied under the direction of Ona Cropper in Vancouver, BC. She began her affiliation with the Vancouver Corelli Strings (Ona’s string orchestra) at the age of 10. Rosie worked her way up the ranks to the position of concertmaster and has been featured as a soloist at many concerts throughout the years. Rosie was also a member of the Vancouver Junior Philharmonic String Orchestra under the direction of Douglas Stewart (Ona’s teacher).

Rosie has been a member of the Celtic group Blackthorn for 30 years. In that time, she recorded four albums with them which include a number of her own compositions. Rosie also performed and recorded with The Carpenter’s Son, Squid Jiggers, Sunshine and You, The Streels, The Halifax Wharf Rats and Triskellion.

Rosie has attended many fiddle workshops, some of her most memorable instructors were Kevin Burke, Liz Carroll, Gillian Boucher, Adam Sutherland, Martin Hayes, Alastair Fraser and Gordon Stobbe. Rosie plays in sessions regularly in Vancouver. She runs fiddle workshops, was a featured instructor at the Georgia Strait Guitar Workshop and The Moveable Music School and has recently launched a new music camp on Gambier Island called the Cat Nap Music Camp.