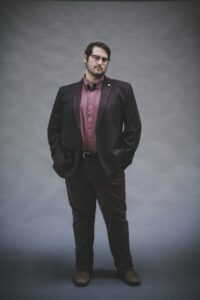 Seamus Fera is an emerging Vancouver-based theatre artist and Literary Manager for Western Gold Theatre. Seamus is a recent University of British Columbia BFA graduate and hopes to focus on creating new Canadian works that are engaging and reflective of modern society. Since 2011, Seamus has been a youth theatre instructor for various organizations throughout the Lower Mainland.

When not acting, directing or teaching, Seamus can be found writing. His play Gale: The Yellow Bricks of Oz was produced by Coquitlam Youth Theatre and previously at Vancouver Technical Secondary School. He has also written Alice: A Wonderland and Genesis: Genesis. Other recent produced scripts include Curiouser and The Greek Cycle: Persy’s Phone. He is currently developing an original play, The Wives, which received public readings at UBC and Sup: A Reading Series. Seamus has abridged various classical plays that have been produced by Arts Umbrella’s Pre-Professional Training Program and Carousel Theatre for Young People’s Teen Shakespeare Program.