Place des Arts will be open on September 19.

The January 30 workshop has been cancelled. The April 10 workshop is still open for registration.

Come make music with us! The North Shore Celtic Ensemble (NSCE) is a dynamic community of young musicians whose goal is to help kids develop good musicianship in a fun and inspiring environment. In these workshops, students will get together in similarly skilled groups to play and share Celtic music while being guided by NSCE instructors. Students are invited to come learn new skills, make friends and have fun!

Cost: The workshop is $19.25 per hour. Students will be at the workshop for 60 or 90-min depending on their level.

There is one other NSCE workshop opportunity this season:
April 10, 2022

Students are not required to attend all three workshops. There will be a concert for workshop participants on the evening of April 10, 2021. 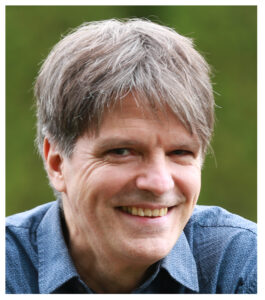 Claude has a winning combination of passion and good humour that inspires music lovers of all ages. Since founding the NSCE in 1998 alongside Jay Knutson, his artistic vision has been the organization’s guiding light. Claude brings his orchestral violin experience from the Vancouver Symphony Orchestra, the Vancouver Opera Orchestra and the CBC Radio Orchestra together with a passion for folk music, creating an innovative youth strings program that has touched thousands on the North Shore. It sprung from a desire to explore and interact with all aspects of music, to connect with community and bring out the best in others and an innate quest for excellence in music. For this accomplishment, Claude was recognized with a 2016 Outstanding Supporter of Youth Award from the City of North Vancouver.

Beyond the NSCE, Claude teaches private violin lessons in Lynn Valley. When he doesn’t have a violin – or even a recorder – in his hands, he loves hiking in his backyard: the North Shore mountains. He also works toward becoming fluent in Japanese, his third language. 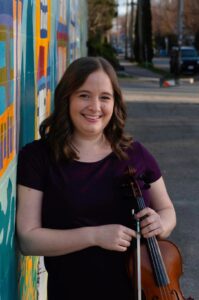 Clarice Scop is a violinist and music educator with a background in jazz music, Celtic fiddling and folk music. She received a Bachelor of Music in Jazz Studies from Capilano University in 2020, and became a BC certified teacher and received a Bachelor of Education (Secondary Music) from the University of British Columbia in 2021. Beginning in September 2021, Clarice will be an elementary strings and music teacher with the North Vancouver School District. Clarice teaches the Intro to Fiddling and Strings & Things groups with the North Shore Celtic Ensemble. When she is not teaching, Clarice plays with the folk trio Wildflower. 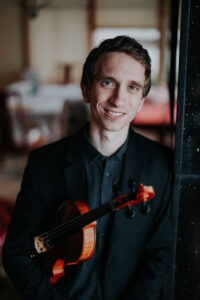 Gabriel is a founding member of Celtic-rock band Early Spirit. Early Spirit’s album Unrelated (2018) was produced by Grammy and Juno award winning musician and producer Leonard Podolak (The Dhuks), and featured guests Natalie MacMaster, Geoffrey Kelly, Leonard Podolak and Michelle Campagne. Their second album is to be released in winter of 2022, alongside Gabriel’s second solo record.

Gabriel is the new the Executive Artistic Director for Vancouver’s North Shore Celtic Ensemble, a youth performing arts group with some of Vancouver’s most promising young musicians. The Ensemble was founded by Claude Giguere (co-director of NSCE senior programs) and Early Spirit bandmate Jay Knutson in 1988. NSCE has hundreds of student alumni across Vancouver including Gabriel himself. Gabriel was previously the musical director for the Bad to the Bow youth fiddle group in Gibsons, BC. Gabriel teaches private violin lessons in North Vancouver.

Gabriel is a graduate of Berklee College of Music in 2016. He has since worked on projects for acts such  as X-Ambassadors, Jason Anick, Bruce Molsky, Darryl Anger, Dervish, Del Mccoury Band and many more.